“If your vote didn’t matter, they wouldn’t be trying so hard to take it away from you.” — Samuel L. Jackson

There is an old saying in politics, usually mis-attributed to Joseph Stalin: “It’s not the vote who counts, but who counts the votes.” Despite the baseless claims of Donald Trump’s post-election rampage of lies and misinformation regarding election results, a cynical project of bad faith that culminated in a bloody riot at the Capitol on January 6, American elections are actually secure and accurately reflected voter preferences. Nevertheless, the made-up outrage over “election fraud” is not only is not going away, GOP lawmakers are still pressing home the fiction that American elections cannot be trusted. The industrious researchers at the Brennan Center for Justice in New York are keeping tabs on voting restriction efforts afoot in a majority of states. The results are not pretty.

Voter suppression, of course, is nothing new and has an old and ugly history in the United States, dating to Reconstruction and the associated racial terror immediately after the Civil War aimed at maintaining white supremacy at the ballot box. The effort to deny full voting rights is still with us and is in full flower a statehouses across the nation.

It is one of the oddities of American politics that elections, even for federal offices like the Presidency, are not governed by federal law but by a hodgepodge of 50 state laws, subject to the whims of state lawmakers. That’s why it is so important to pass H.R. 1, a federal bill now in Congress will help protect voters throughout the U.S. and help prevent partisans from playing games with the single most important part of a democratic republic: the right of the people to have their vote count and to be free of interference in the process of casting that choice.

Write, call, text or e-mail your representative in Congress to voice your support of H.R. 1., the “For the People Act of 2021.” When it comes to voting and suffrage that came at the expense of people’s lives, don’t let your franchise be stolen from you. Use it or lose it. 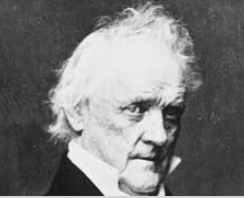 Just because James Buchanan is no longer the worst President in American history is still not a reason that we have to “celebrate” him.

When I was a lad, February offered two – count ’em – free days off: Lincoln’s Birthday on the 12th and Washington’s Birthday 10 days later. That lovely scheme ended in 1971 to be replaced instead by the smoggy bureaucratic idea of lumping all 46 Chief Executives into one day of national forgetting. Presidents Day stinks and we’d be better off consigning it to a dusty room in the National Archives where even the spiders wouldn’t bother with it.

Why should we even theoretically “celebrate” all the Presidents? Clearly, Abe and George deserve a bit of love, but Richard Nixon? It was on Nixon’s watch that birthed this ghastly “holiday” as part of the mind-numbingly named Uniform Monday Holiday Act. (Oooh, the party is ON!) Even Dick knew there was no chance in hell that his birthday on January 9 was going to be considered even as an Arbor Day-level holiday. So the best he could hope for in the way of future hailing of his chiefness, was sharing attention with the likes of John Tyler, Franklin Pierce and Jimmy Carter. Given that this First Fraternity membership gives equal weight to the general who defeated the Third Reich as well as the mummy-haired phony Pharaoh of Forest Hills, it’s not fair to sully the deserving Presidents by association with the dimmer bulbs. Why should Thomas Jefferson have to share a day with Andrew Johnson? Barack Obama deserves more honor than George W. but this putative holiday lumps them all into one bunch so that we can’t tell them apart. It’s a bullshit holiday.

In the interest of Presidential equity, I say bring back the two February birthday-holidays, add January 30 to the mix – give FDR some credit already  – and heave-ho Columbus Day with a long-overdue boot. After all, liking or loathing a President is the principal point of having a half-assed democracy like ours. Things haven’t been the same since all the POTUSes got balled up together into one nothingness of a federal holiday that has cost us a February day off and gave us nothing in compensation but 25% off all sectional sofas.

Getting Around the Stacks